Stumbling onto a Love of Life

If you look at those who have been greatly successful in life many times it was their passions that led to their “making it”. They didn’t actively seek it out but rather by creating their art and doing “the work” they stumbled into a life they truly love.

Tyler Oakley in the interview shown below shares his thoughts on his success so far,

At the beginning, the first year, the first two years, the first three years, I was like no. […] I never had the intention that this is going to be my life. Like, I always thought it would be a fun hobby. – Tyler Oakley

At the time of this writing, with over 3.6 million Youtube followers alone, it has clearly blossomed into a full-time gig of which was never originally intended. I’ve enjoyed watching for the last 5 years and seeing it grow into what it is today. ( bacon )

That is how life works.

Jim Henson started making puppets while he and his wife Jane were in college. They did it as a means to an end to help fund school. A result of this Sam and Friends, Henson’s first live action televised puppet show in DC, was originally planned to air for a few weeks which turned into six years. 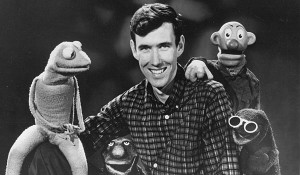 In Henson’s Place ( iTunes, Youtube – Full ), a 52-minute documentary made in 1984, Henson describes his career as,

I came to puppetry more through the art side of it. […] It’s almost like in theater an author writes things and creates characters. In puppetry you create characters […] that’s really your artwork […] which was the beginning of all of this. – Jim Henson

We never know all the details of where life will take us. The key is to go with the changes: adapt, evolve, and grow. That is life.

Frank Oz goes on to mention that it wasn’t always successful. In the beginning they were doing a lot of commercials and grunt work just to keep practicing their art. All the networks turned them down because they thought it was just for kids.

The contrary was not realized until Lord Grade backed The Muppet Show. That major success only happened in the last 8 years… in context of 28+ years of Jim Henson and Frank Oz working with muppets.

“I really do believe that all of you are at the beginning of a wonderful journey. As you start traveling down that road of life, remember this: There are never enough comfort stops. The places you’re going to are never on the map.” – Kermit

For some reason, universally, the things that we chase the most are often what eludes us. We seek the end result of the effort, not seeing the underlining motivator or catalyst.

“To make a million dollars” is a bad reason to start a business. There is no focus and you will spin in a thousand different directions to make money. “To craft the best socks on the planet iterating over many years” is a perfect reason. Create it, refine it, find your audience, and the money will take care of itself.

“If your only goal is to become rich, you will never achieve it.” – John D. Rockefeller