File this under the “I’m not surprised category” because we have seen this before. If memory serves me correctly, when Apple launched the iPhone 3GS, you could only get “voice dial” with the hardware purchase.

Fast forward to a little over 2 years and Apple launches the iPhone 4S. This time they talk about a great new artificial intelligence feature called “Siri” who is your own personal assistant. However, if you look in the fine print on Apple’s website then you will find it is only available for iPhone 4S.

Siri is available in Beta only on iPhone 4S and requires Internet access. Siri may not be available in all languages or in all areas, and features may vary by area. Cellular data charges may apply.

That little tidbit, “…requires Internet access”, means Apple servers power the intelligence and not the phone.

How can I assume that this only to sell more hardware? Because I have Siri right now. Before Apple acquired it and a bit after, you could download it in the app store. Since the iPhone 4S announcement it has been removed.

Despite being much uglier, the app was able to do every feature that was demoed in the keynote for iPhone 4S. I have the old app and tried “Do I need an umbrella today?” and it checked the weather for rain. Worked perfectly.

Before I tried that, Siri let me know that it would cease serving me on October 15th and be available only on an iPhone 4S. Screenshot below: 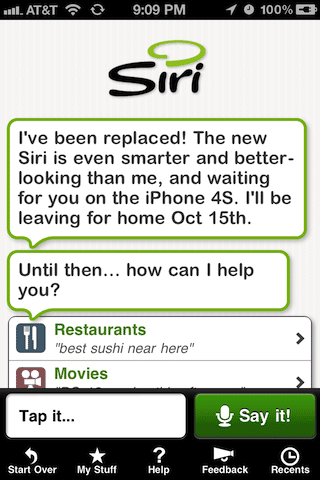