The smallest interactions add up over time to give our work personality. They can convey positive or negative emotion just as verbal communication can do the same.

Apple has released iOS7 beta 5 at the time of this writing. There has been a monumental shift in the user interface and user experience of the platform. Many of the little details have been updated, some forgotten, and you get a sense that Apple is going for a non-intrusive, overall lightness in the new OS.

Out of all the changes, my biggest pain point has been the lock screen. It’s almost there but not yet.

When showing it to others, and myself, many would swipe up due to the up arrow under the phrase, “Slide to Unlock”. In beta 5, Apple has updated this to include a right arrow to give the motion context. 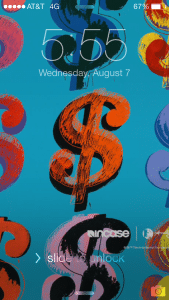 The up and down arrows on the edges of the screen were replaced with a small dash in the same weight of the previous line. I would argue to remove the modified indicator as it is not represented elsewhere in the UI. One just swipes from anywhere to bring up the “Control Center” panel.

The camera icon in betas 1-4 consisted of a white camera with a lower opacity. Now, it is colored by an intense blur of the background behind it, which oddly, works to be more prominent than simple opacity alone.

Comparing the iOS 6 Lock Screen to the iOS 7 version you notice the welcomed shift to a less cluttered, clean design. However, the small, well-crafted details really add up to the best experience possible.

Bonus: Some great iPhone wallpapers from Incase on Flickr: http://garyb.co/QUO1