Since Tweetie was purchased from atebits you can definitely tell that priorities have shifted to align more with the focus of Twitter, Inc. Expected but unfortunately features that we have all come to love have been removed over time. This has been reflected in the Mac app as well as the iPhone app. ( Fred Oliveira sums it up well in his post Dear Twitter. )

Below is Twitter for iPhone, which has a very unique user interface for a Mac app. Many of the third party services were removed after Twitter, Inc. acquired it. Adjustments were made to align it more with the focus of Twitter, Inc. For example, Twitter’s own URL shortener is the only option. Just for kicks, I opened Tweetie for Mac the other day. It works and I do miss it. 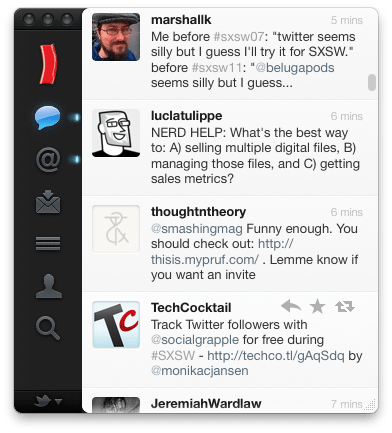 With all that said, I set out to find a replacement. These are my reviews for eight of the Twitter apps available in the Mac App Store.

This Mac app feels like it was wrapped around webkit ( browser ). Almost as if it were a glorified Site Specific Browser that one could have made with Fluid and a Userscript. Oddly enough, it also reminds me a bit of Tweetings. It has the standard set of Twitter features, multiple accounts and lists. There isn’t much beyond that. 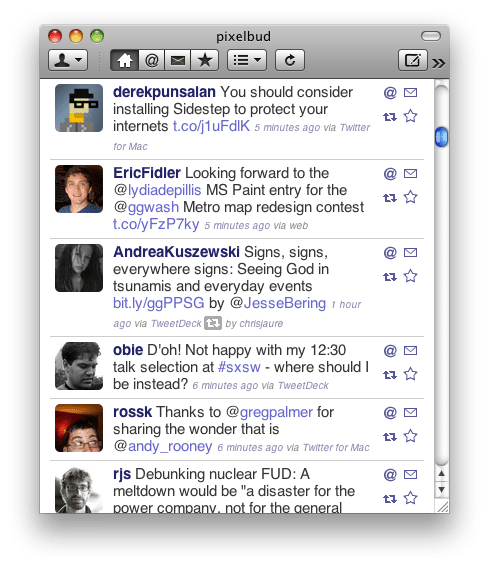 Below are the list of features included in Tweetings:

This was by far my favorite Twitter client for the iPhone. The Mac app seems to either have been created by another developer for them or they have shifted priorities with what features to include. Either way, I hope a few of my favorite features of the Twitter client makes it into the Mac build. ( *cough* CloudApp *cough* ) Even without that, the app is well rounded.

It has a clean interface. Seems there is a purpose to every element. The tweet box at the bottom is always viewable. Great for when you need to tweet something quickly. 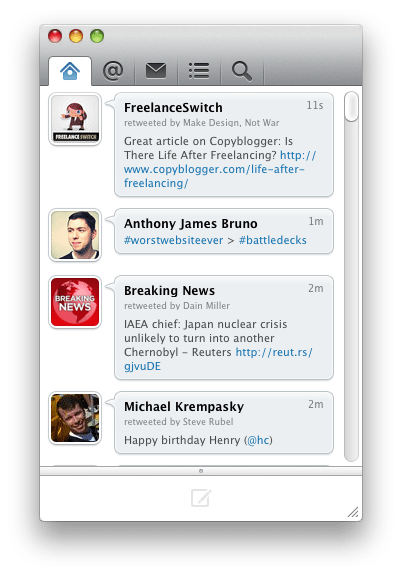 Below are the list of features included in Weet:

At first it felt like an interface wrapped around Webkit. Continuing to use it, my opinion changed. It does have Growl support, which is a nice plus. Growl makes getting new @replys or Direct Messages are as simple as glancing. Icons in the toolbar light up as new items roll in. One interesting tidbit is that Tweetings shows a preview of an instagr.am photo in the timeline — nice touch. 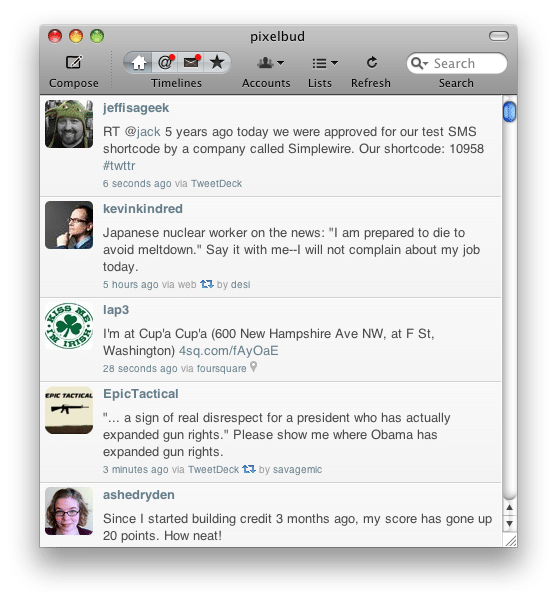 Below are the list of features included in Tweetings:

A very polished Mac app to say the least. Not only does this app do Twitter. It also supports Facebook, Flickr, Digg, Google Reader, and RSS.

One of the main features that I do wish existed would be the ability to turn off or disable categories within each service. Mute them if you will. For instance, with Twitter be able to ignore Favorites, Retweets and Lists. That would leave the unread count to only Timeline, Mentions, and Messages. You can right click and choose “Grouping > Include in Parent Folder” which will remove them from being shown in the parent category’s view. However the unread counts still stay the same.

This is the best Google Reader Mac app that I have found thus far. For that it is highly recommended. As a Twitter client, it just wasn’t for me. 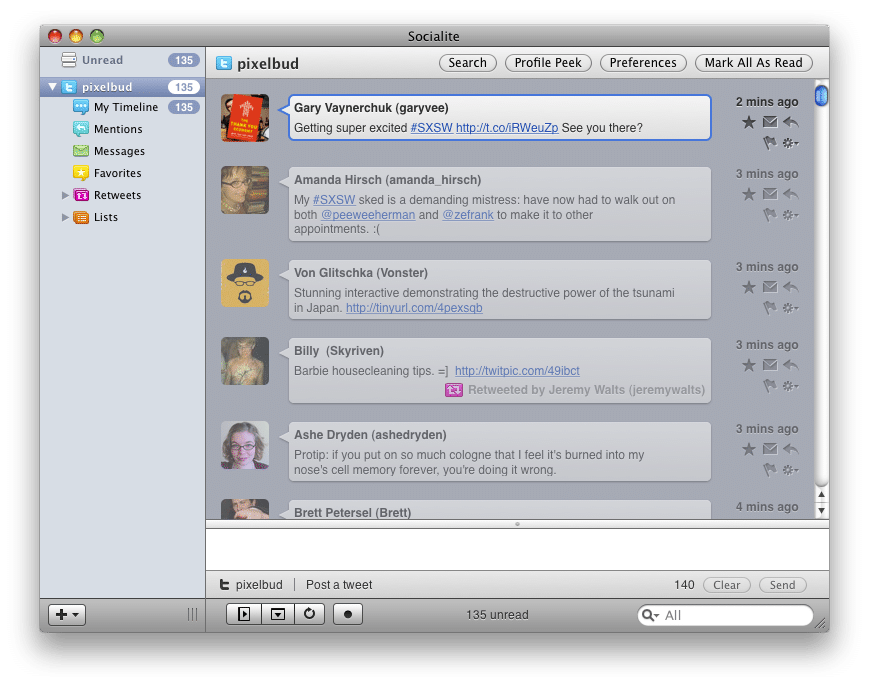 The cutest little Twitter client on the Mac app store. Cutesy… I mean, Itsy includes the default Twitter features that you would expect from any client. It has options for themes. Growl support is also built right in. Well designed and minimal. 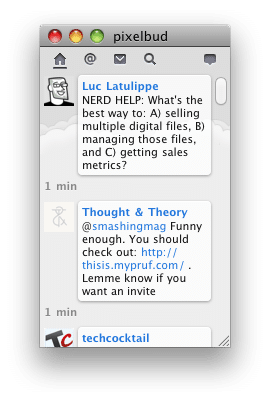 Below are the list of features included in Itsy:

A very nice touch upon opening the app. You get a 3 Step welcome: sign in, choose a theme, and Learn More. If you love themes then this is the app for you. It comes with 9 themes upon install and a theme directory. My favorite themes are Twitlike and Swiss. Not a big fan of the app’s icon but that is just personal preference. 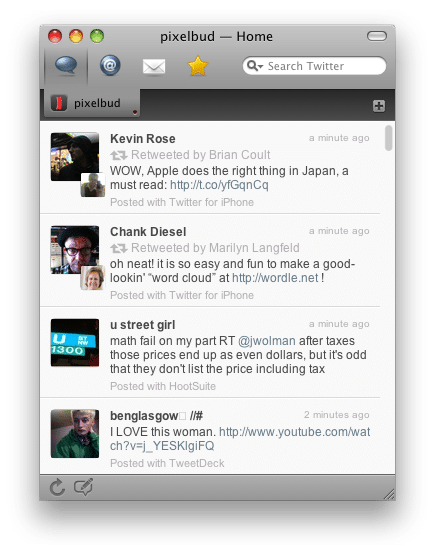 Below are the list of features included in Kiwi:

Out of all the Twitter for Mac apps that I tried, this was by all means my favorite. There is a free version, which is ad supported. The “Pro” version is $19.99 at the time of this writing. Compared to the others, this is the most expensive Twitter app I’ve found. That being said it’s a solid experience. All the standard Twitter features and a nifty drawer that displays additional information as needed. 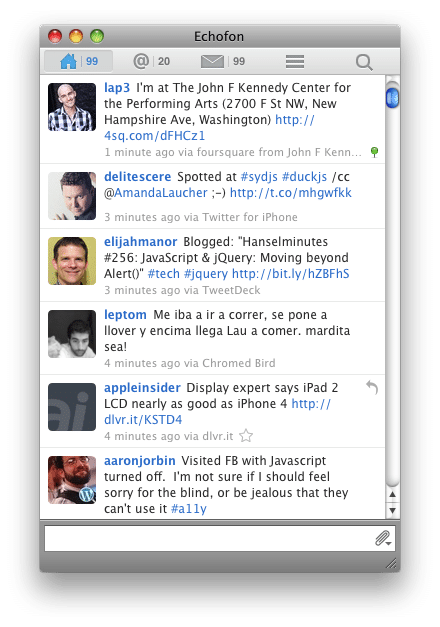 Below are the list of features included in Kiwi: