Why Personal Trainers Can Fail, But You Got This

Oh, the joys of joining a gym. This has actually happened to me a few times in the past: I get super excited and highly motivated! It is time to get fit! Join the gym; then get sold on the idea of a trainer. Going from couch potato to gym enthusiast in an instant.

Perhaps it is part of the sales tactic but trainers seem to forget that you do not spend every single day at the gym.

The last two I had did not prescribe a workout routine, would reschedule appointments, and seemed sporadic. Perhaps it was bad luck. However, the same results in two different states at two different gym chains make you wonder.

The last trainer recommended 6 solid days of gym a week, 3 days of strength building, and 3 days of cardio. I could barely handle the treadmill for 15 minutes much less show up like clockwork.

Why? Too much too soon. The habit wasn’t formed.

The new plan? Three days of cardio for 5 weeks: Monday, Wednesday, and Friday. Once that habit is formed by doing it routinely for over 21 days then I will add to the regimen. I’m reminded of the following quote by Confucius:

It does not matter how slow you go so long as you do not stop.

Get to know the “why” or the value behind your new habit. This will keep you going when it gets hard. My personal fitness value is to improve my fitness, look after my physical and mental health and wellbeing. To achieve this a few of my ongoing goals are to keep my triglycerides normal, to not turn into a computer geek couch potato, and to at least maintain the weight I’ve already lost. Better quality of life.

Leo Babauta of Zen Habits has been doing his own research on the matter. ( Love when people in the same tribe strive for the same things! ) He has to say this on the matter:

“But what I’ve found in doing research and working with beta testers is that the most important thing isn’t some secret ideal fitness plan … but forming the habit of fitness.” ( Source )

Steve Jobs was famous for wearing the classic black mock turtleneck shirts, Levi’s 501 jeans, and grey New Balance sneakers. In Walter Isaacson’s biography of Steve Jobs, he touches on when Steve tried to create a uniform for Apple. Employees didn’t like it but Steve ended up creating his own personal brand of style as a byproduct:

Sony, with its appreciation for style, had gotten the famous designer Issey Miyake to create its uniform.

In the process, however, he became friends with Miyake and would visit him regularly. He also came to like the idea of having a uniform for himself, both because of its daily convenience (the rationale he claimed) and its ability to convey a signature style. “So I asked Issey to make me some of his black turtlenecks that I liked, and he made me like a hundred of them.” Jobs noticed my surprise when he told this story, so he showed them stacked up in the closet. “That’s what I wear,” he said. “I have enough to last for the rest of my life.”

Vanity Fair has a great profile on President Obama, in the piece the President describes conserving the decisions he has to make:

You also need to remove from your life the day-to-day problems that absorb most people for meaningful parts of their day. “You’ll see I wear only gray or blue suits,” he said. “I’m trying to pare down decisions. I don’t want to make decisions about what I’m eating or wearing. Because I have too many other decisions to make.” He mentioned research that shows the simple act of making decisions degrades one’s ability to make further decisions. It’s why shopping is so exhausting. “You need to focus your decision-making energy. You need to routinize yourself. You can’t be going through the day distracted by trivia.”

The New York Times gives a glimpse of the research that the President references above in the article Do You Suffer From Decision Fatigue?. So what is decision fatigue?

Decision fatigue is the newest discovery involving a phenomenon called ego depletion, a term coined by the social psychologist Roy F. Baumeister in homage to a Freudian hypothesis. Freud speculated that the self, or ego, depended on mental activities involving the transfer of energy.

In today’s modern world, the amount of choices we are bombarded with is unprecedented. Never in our history have we had to filter so much noise. Need to buy some toothpaste? Great. A quick search on Amazon alone gives you 4,182 results and that was after filtering it down to just the “toothpaste” category!

The article goes on to describe what happens to your decision-making process whenever you become fatigued:

Decision fatigue helps explain why ordinarily sensible people get angry at colleagues and families, splurge on clothes, buy junk food at the supermarket and can’t resist the dealer’s offer to rustproof their new car. No matter how rational and high-minded you try to be, you can’t make decision after decision without paying a biological price. It’s different from ordinary physical fatigue — you’re not consciously aware of being tired — but you’re low on mental energy. The more choices you make throughout the day, the harder each one becomes for your brain, and eventually it looks for shortcuts, usually in either of two very different ways. One shortcut is to become reckless: to act impulsively instead of expending the energy to first think through the consequences. (Sure, tweet that photo! What could go wrong?) The other shortcut is the ultimate energy saver: do nothing. Instead of agonizing over decisions, avoid any choice.

It frees your mental energy when you can get your day started and not having to worry about the minutia of every detail. That part of your day is on autopilot.

Life is a series of choices over the span of our existence. If you make poor choices, this creates poor habits, which in turn gives poor results. We must conserve our decision making “energy” so that we can make the right choices. Making the right choices consistently over time builds good habits and will create a lot of “luck”.

We make our own luck.

Thinking back on the early years of my design career, I had a good friend and coworker John that I used to bounce ideas off of. We would spend hours talking about marketing, common sense approaches to problems, and books that we were reading. In fact, he was the first to introduce me to Seth Godin’s books, which have been a great influence on my life since then.

In an interview by The Verge, David Lanham, illustrator of Sticker Pals, has the following to say about his friends in the community,

“They provide support, inspiration and keep me in check when I’ve missed the mark or need some suggestions. I make a ton of revisions when I’m working on things — sometimes just bad decisions, sometimes over-thinking a problem too much. It’s so fantastic to have a good group of friends to bounce ideas off of to really get to the core of a problem.“

This topic is discussed in, The Compound Effect by Darren Hardy, as he mentions:

“There are few things as powerful as two people locked arm and arm marching towards the same goal. To up your chances of success, get a success buddy, someone who’ll keep you accountable as you submit your new habit while you return the favor. I, for example, have what I call a “Peak-Performance Partner.” Every Friday at 11 a.m.  sharp, we have a thirty-minute call during which we trade wins, losses, fixes, ah-has, and solicit the needed feedback and hold each other accountable. You might seek out a success buddy for regular walks, runs, or dates at the gym, or to meet to discuss and trade personal-development books.”

In 2012, my good friend Erin ( @endesign ) and I often met up over a delicious slice of cake, bounced ideas, talked about personal-development books, and discussed what we’ve learned recently.

Inspiration is always created during these type of conversations.

Find someone you can bounce ideas off of. Challenge each other. Push yourselves and keep each other accountable. Find your tribe or as Jim Kozlowski likes to say, “our people”.

As a person that has over 900 books on his Amazon wish list, finding time to consume all the books that I want to seems daunting at times. I’m not a fast reader either. With the current list, if I stopped adding to it and read only one book a month, it would take me 75 years to read all of the books. If I read 4 a month, it would only take 18 years. Only. So, with that being said, I do have to prioritize my reading list.

How do I do that? Trello.

Previously, I’ve mentioned how I keep motivation at the forefront of my mind with Trello. I’m really leaning into organizing, doubling down on focus, defining my goals, and establishing a routine to sustain it all. Trello has been the perfect tool to do that with.

I have a few Trello boards set up. One for daily tasks, one for overall goals, and one for a backlog. The backlog gives a place to quickly store ideas, categorize tasks by project, and line them up to be pulled into the task board. Every Monday, I groom ( review and prioritize ) the task board bringing in action items for the week.

At the moment I’m reading about 2-3 books at a time. Two audiobooks and one Kindle/paper book.

Personally, I use Trello all the time. It’s a great tool for planning out projects, keeping track of a to-do list, or organizing your thoughts into actionable tasks.

Lately, I’ve been doing some goal setting and deep diving into some areas that I want to see growth in. With setting goals, I’ve decided to also create guideposts.

Guideposts are the physical reminders of goals and the set direction that I want to go in.

Examples? Visual reminders on a cork board. Custom made signs around my living space. Notes to myself.

For instance, if I wanted to consistently eat healthy every day during the week. Keeping in mind “the why” or the value behind the goal, which in this example would be “I want to eat healthy to lengthen my life.” The visual counterpart, or guidepost, would perhaps be a picture of some great food that I made, and then printed under that photo would be “Eat healthy. Lengthen life.” 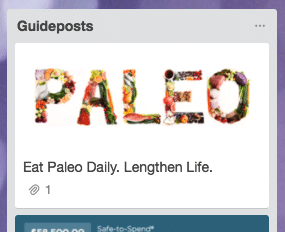